“We accept the reality of the world with which we are presented. It’s as simple as that.”
-Christof, The Truman show

Do you think what you see is real? How can you be so sure about it? How would do justify the fact that the world we live in is nothing but a simulated reality? Well, I cannot. And this is why I sometimes think, is everything surrounding me really real? 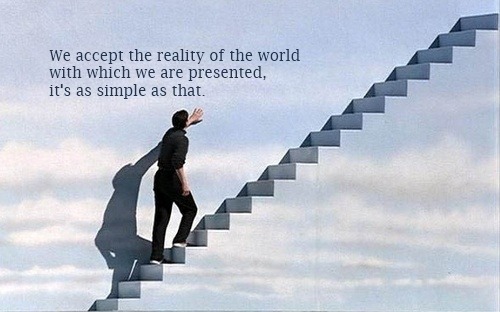 The Truman show is a Jim Carrey starred American movie released in 1998. The story is about the man named Truman Burbank whose life is transmitted unedited, uncut, 24X7 on the show called The Truman show. He lives in a dome, the fake world created for him by Chistof (Creator of his world, just as Christ). Truman believes in the reality which was presented to him. He could not see beyond the simulated boundaries for a very long time because of the human nature we possess, to believe in the reality that is put before us.

A similar idea was also presented in the movie series named The Matrix. In the movie series, the world where people lived in was simulated by very complicated computer programs. However, only a few could understand this. Rest all of them believed in the perfectly beautiful world covering up their minds.
Well, the movies are made to be dramatic and exaggerating. But try to draw and analogy between the idea put above and the world we are living in. Aren’t we totally overwhelmed by the world, things, rules, gods, food, culture, concept of good bad etc. that are fed into our minds? We are not humans, but people of varied countries, communities, beliefs and standards. Our minds don’t try to see to truth, it’s comfortable in the reality framed for us.

We always connect doubt with negativism. However, there’s something good about being doubtful. It is at least better that agnosticism. By being doubtful one doesn’t deny the possibilities. Doubting the standards and stereotypes rather, paves a new path for us towards seeing the reality with an unbiased and clear mind. Doubt is the first step towards the truth. Also, Gautam Buddha had said, “Doubt everything. Find your own light.”

Do you think that the reality might be different from what we have believed it to be and we can discover the truth of life, of  our existence and move beyond the sham world?

This post was written as a part of the three day Quote challenge in which I was tagged by two of my blogger friends Bhavikk and Tennyson. Thanks to both of you for tagging me into the challenge.

Rules for the challenge:
Here I tag another three people for this challenge:

0 thoughts on “Do doubt. It might be just a simulated reality.”